This bold concept builds on the global success of the Evoque and continues Land Rover's tradition for creating and leading new market segments. The concept is being shown to gauge reaction and to assess the potential for what could be another white space product from the world's leading SUV brand. 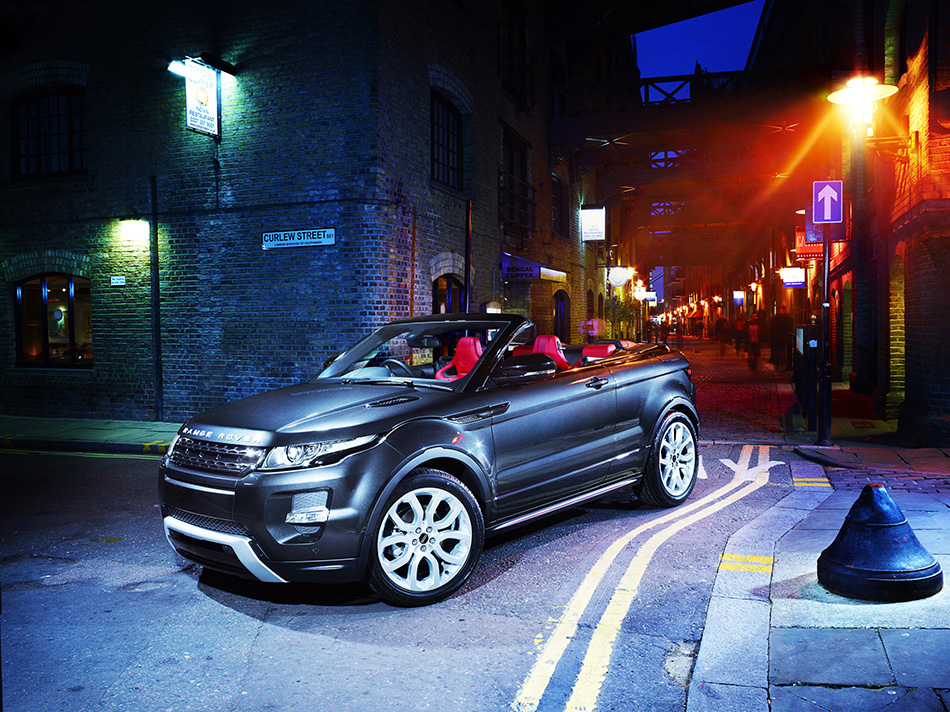 The concept has been developed by Land Rover Design Director, Gerry McGovern and his team. Commenting on the concept, McGovern said: "The Evoque lends itself beautifully to the idea of a convertible. This study is not a traditional convertible design execution - instead we have worked with the balance of the Evoque's lines to retain its distinctive shape and create something that is unique and, we believe, highly desirable."

The soft-top convertible concept is based on the Range Rover Evoque Coupe. It features a fully retractable premium roof system with a Roll Over Protection System [ROPS]. The concept cleverly combines capability and versatility with a drop down tailgate and a comfortable four seat package. The vehicle has been developed with Land Rover DNA at its heart, retaining key characteristics including a command driving position and all-terrain capability.

The Evoque's dramatic rising waist line and distinctive shape has been retained and the new convertible body style has been achieved with minimal changes to weight and torsional rigidity. The hood is housed in a neat tapered finisher with the roof mechanism stowed discretely below the belt-line.

The Range Rover Evoque has been on sale for six months and is widely recognised as an international success with strong sales performances in 170 global markets, and achieving excellent customer satisfaction and class-leading residual values. The Evoque has been launched to worldwide media acclaim and to date has been honoured with over 90 international awards.

John Edwards, Land Rover Global Brand Director said: "The Evoque Convertible Concept is a new twist to the Evoque story and explores the potential to further extend the nameplate's appeal by giving existing customers more choice, whilst at the same time reaching out to a completely new customer base. We are excited to see the response to this concept as we assess the potential for building on the Evoque's exceptional success so far."

The Evoque Convertible Concept will be revealed at Geneva as a design and engineering study. There are no production plans confirmed.