For several years, the Renault Sport-badged version of the brand's best-selling hatchback has been unanimously acclaimed by enthusiasts as one of the best performance hatches of its segment, and definitely one of the most fun to drive. Building on this success, Renault has chosen the 2009 Geneva Motor Show to reveal New Clio Renault Sport.

This pedigree Renault Sport model comes in a choice of two versions in order to meet the demands of two distinct types of customer: 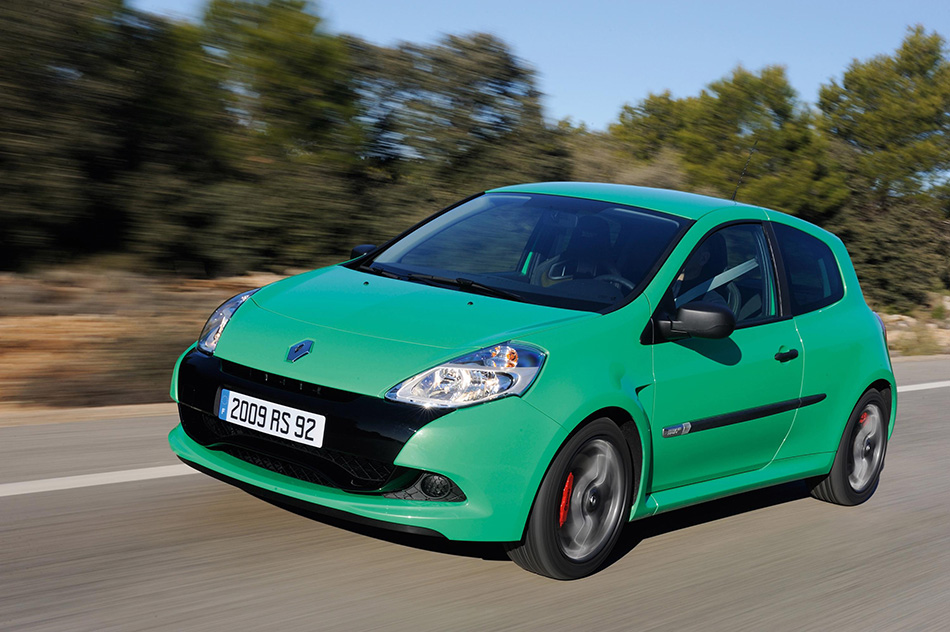 New Clio Renault Sport boasts the same ingredients that have forged the success of its predecessors, such as:

New Clio Renault Sport is manufactured at the Alpine factory in Dieppe, France.

It is due to be launched in the spring of 2009 (depending on market).

Since 2000, the successive variants of Clio Renault Sport have led to it becoming the best-selling performance hatchback of its class, with worldwide sales totalling more than 70,000 cars. The strengths of Clio III Renault Sport's chassis, brakes and steering combined with the precision of its gearbox have resulted in the model being widely praised as the most efficient of its class, by the media and exacting owners alike. To provide a match that is more closely tailored still to the demands and needs of its customers, Clio Renault Sport today comes in two distinct guises, with the introduction of Luxe (name may differ according to market) and Cup versions.

The Luxe version is aimed at motorists looking for a comfortable, well-equipped, status-enhancing car which places the accent on driving pleasure. New Clio Renault Sport Luxe features the 'Sport' chassis which, like the car's acoustic performance, has been upgraded with a view to delivering an even higher standard of comfort. A range of appointments make this new sporting model from the Renault Sport stable truly unique, including a broad selection of body colours, interior trims, upholsteries (including leather) and aluminium alloy wheels. A long list of equipment carried over from New Renault Clio is available, too, including the Carminat TomTom® navigation system, a hands-free card and cruise control with speed limiter.

The Cup version stands out through its efficiency and performance and will notably appeal to connoisseurs who are passionate about their driving. Equipped with the 'Cup' chassis, it is 36kg lighter than New Clio Renault Sport Luxe ('Sport' chassis). Indeed, the design of certain components (transmission, seat frames, wheels) and the dropping of certain items of equipment enables the Cup version to boast the best weight-to-power ratio of its class (6kg/hp).

New Renault Clio's original lines have been revised with the accent on more athletic, telltale curves. The more aggressive front end incorporates an F1-type aerodynamic splitter and a generously-sized, low-positioned air intake, the mission of which is to cool the naturally-aspirated 2.0 16V engine (147.5kW/203hp). The sills, extractors and wider front and rear wings all serve to highlight the sporty calling of New Clio Renault Sport which features Renault Sport's new styling identity cues with the Renault Sport Design Pack's two-tone colour scheme based on a choice of Gloss Black or Cold Metal Grey for the front bumper mouldings, exterior mirror housings and diffuser. At the rear, the twin exhaust tailpipes have been incorporated into the diffuser.

New Clio Renault Sport sits squarely on the road thanks to its wide tyres (215/45) mounted on 17-inch aluminium alloy rims, through which it is possible to see the Brembo brake callipers and big brakes that deliver powerful, durable stopping power. Renault Sport badging is visible on the tailgate, on the side protective mouldings' satin-finish chrome inserts, as well as on the intake manifold. New Clio Renault Sport marks the introduction of the brand new exclusive Alien Green metallic paint finish.

New Clio Renault Sport's aerodynamic features include a front splitter, front-wing air-extractors and a rear diffuser, a unique feature in this segment. Compared with the new version's predecessor, the CdA has been cut by 0.02 to 0.75. The extractors visible on the front wings contribute to the car's aerodynamic performance by neutralizing the turbulence produced by the wider wings and play a part in improving the model's CdA. They also facilitate the extraction of hot air from underneath the bonnet, while the vents are angled to channel airflow along the sides of the car for enhanced performance. The most significant single technological innovation is the air diffuser. This aerodynamic feature carried over from F1 is only fitted as standard equipment to range-topping sporting cars. The diffuser's role is to prevent the rear of the car from lifting and guarantee stability at high speed by channelling airflow in such a way that it increases ground effect by producing a low pressure zone beneath the car.

The model's sporting pedigree is confirmed by details such as the aluminium pedal covers and footrest, as well as by the perforated leather steering wheel with visible stitching and yellow centrepoint marker. The yellow rev-counter includes an audible and visible Formula 1-style gearshift indicator to help optimize gear changes.

Thanks to a range of three trims (Argenté Grey, Yellow, Dark Charcoal), customers can select the colour of the seatbelts, dashboard trimming and/or upholstery. The specific Renault Sport seats are exceptionally comfortable and ensure a high level of body-hugging lateral support. Bucket seats designed and developed in association with Recaro are also available for New Clio Renault Sport. They are equipped with lateral airbags, plus a rigid, glass-fibre/polyamide-injected shell which provides the sort of all-enveloping experience normally associated with motor sport. The slots for the harness belts and the integrated headrest add a further sporty note, while at the same time serving to hold occupants firmly in place.

As with all the models developed by Renault Sport Technologies, Renault Sport badging is visible inside the cabin on the rev-counter background, sills and front seats. 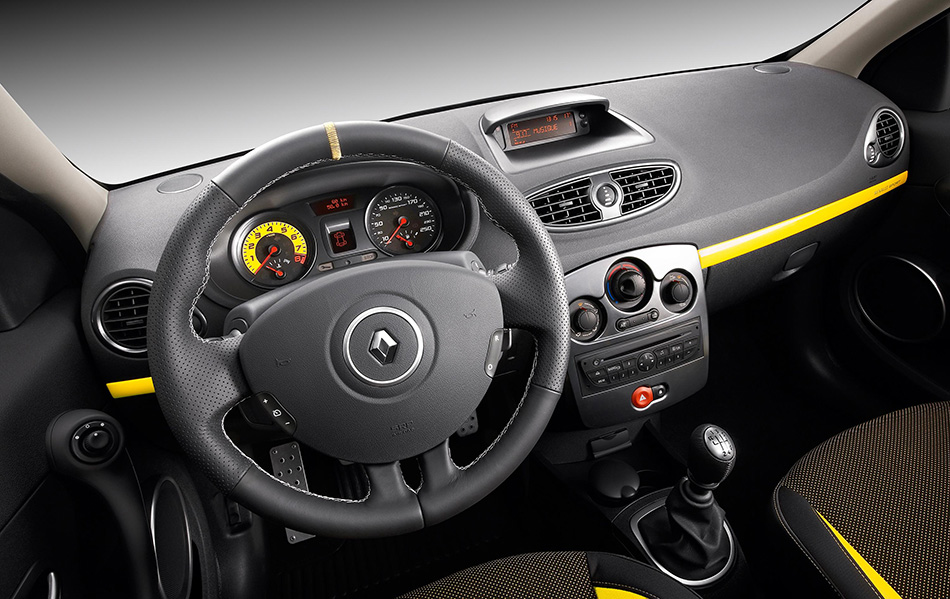 Compared with New Renault Clio, New Clio Renault Sport's grip and cornering potential have been upgraded, with the front and rear tracks widened by 48mm and 50mm respectively. The wheelbase has been extended by 10mm to 2,585mm for greater stability, while the front suspension's independent steering axis layout is unique to the B segment. To minimize weight, this technology employs aluminium components and guarantees precise handling and outstanding traction whatever the conditions. Driving pleasure is further enhanced by the responsive front end which is insensitive to torque steer, both through tight corners and along straights. Based on that of New Renault Clio, the rear suspension features a reinforced programmed deflection torsion beam which complements the efficiency of the front end's independent steering axis system to ensure precise, immediate turn-in response.

The development of the Sport chassis was guided by a bid to strike the ideal balance between performance and comfort. The stub axles have been lengthened to increase the rear track, and New Clio Renault Sport marks an improvement in comfort over its predecessor thanks to the switch to double-effect damper technology. The energy which needs to be dissipated is partly absorbed by an additional level of valving. The performance of these new dampers is particularly appreciable on longer journeys and motorway drives. Meanwhile, body movement is kept in check thanks to the bigger diameter of the front anti-roll bar which has been raised from 20mm to 21 mm. Compared with New Renault Clio, the stiffness of the rear suspension has been uprated by 25 per cent thanks to the fitment of a 30mm-diameter anti-roll bar. Specifically-developed Continental Sport Contact 3 tyres (215/45 R17) ensure swifter, more precise steering response, while their rolling resistance is five per cent lower compared with Clio III Renault Sport's tyres. The aluminium alloy wheels are each 1kg lighter and the gain in terms of inertia further contributes to the enhanced steering response and crisp acceleration.

New Clio Renault Sport is alternatively available with the Cup chassis which has been engineered to deliver an exacting ride and uncompromising driving pleasure. The ride height is 7mm lower than that of the Sport chassis and the resulting lower centre of gravity ensures improved cornering performance because of reduced weight transfer. Its ability to corner flat is further enhanced by uprated damper calibration compared with the Sport chassis (plus 27 per cent at the front, plus 30 per cent at the rear). Torsional rigidity has also been increased by 10 per cent, enabling the independent steering axis front suspension to reveal its full potential. Last but not least, the Cup chassis comes with closer ratio steering (7.5 per cent quicker compared with the Sport chassis) which, combined with specific development, favours feedback to the driver in conditions of varying grip.

A sporty, normally-aspirated engine with a specific power output of more than 100hp/litre

The Luxe and Cup versions of New Clio Renault Sport are powered by the same normally-aspirated 2.0 16V engine (F4R RS). With a specific power output of more than 100hp/litre, this powerplant delivers an extremely high standard of performance for the hot hatch segment. In addition to the gains achieved at low revs, peak power has been increased by 2.5kW to 147.5kW (203hp) at 7,100rpm. Meanwhile, the torque boasted by New Clio Renault Sport has been upped 20 per cent thanks to a new cylinder head, continuously variable intake valve timing and fine-tuning of the engine mapping. The first, second and third gear ratios have all been shortened for punchier acceleration and for motoring in built-up areas. This engine drives through a manual six-speed gearbox (TL4) and claims maximum torque of 215Nm at 5,400rpm (compared with 5,500rpm for Clio III Renault Sport). New Clio Renault Sport accelerates from standstill to 100kph in just 6.9 seconds and covers the 1,000m standing start in 27.3s. The top speed of 225kph is 10kph higher compared with that of the former version.

A long list of safety and travelling comfort equipment has been carried over from New Renault Clio to New Clio Renault Sport, including:

In day-to-day use, occupants will particularly appreciate the spacious cabin and generous boot space, two hallmarks of New Renault Clio.

New Clio Renault Sport is built on the same platform and is equipped with the third-generation Renault System for Restraint and Protection (SRP3). Like Clio III, which obtained a five-star EuroNCAP crash test rating in 2005, it is engineered to provide uncompromising protection for all occupants.