The Geneva Motor Show sees Renault take the wraps off the latest hatchback and estate versions of the best-selling Renault Clio. New Renault Clio's styling, comfort, versatility, safety credentials and equipment, which form a package worthy of that of models from the next segment up, are sure to appeal to a large, loyal customer base worldwide. At the same time, its extremely rigorous build quality makes it one of the most reliable cars of its class.

From the outset, Renault's Corporate Design Department worked closely with the project engineers to incorporate the brand's new styling identity. New Renault Clio sits squarely on the road and features more streamlined lines thanks to its extended length (4,027mm; 41mm longer than Clio III), while the contours of its headlamps extend downward to meet the outer parts of the grille. The dynamic front bumper design incorporates a broad air intake which is picked out with matt black protective mouldings. The steeply-raked 'soft' nose is flanked by the foglamps and gives the new hatchback a determined gaze, while the two-tone exterior mirror housings stand out through their sleeker forms. At the rear, the waistline is extended by new light clusters, and the more dynamic feel of New Renault Clio is further emphasized by the revised bumper, as well as by the reversing lights and rear fog lights which are situated lower down and closer to the car's sides. A WIDE CHOICE OF SPORTING VERSIONS

A line-up of three sporting versions

Until today, no original equipment navigation system had been available for the compact car segment for less than €500. Manufacturers frequently propose either semi-integrated, entry level monochrome systems which use the radio's small screen, or else products that are more costly. However, such solutions fail to really meet the expectations of customers who have consequently turned increasingly to more affordable removable products, which explains why this market is expanding so quickly. Today, for less than €500, Carminat TomTom® brings those who hesitate between removable and integrated navigation systems the best of both worlds, and gives New Renault Clio owners a whole new outlook on motoring mobility. 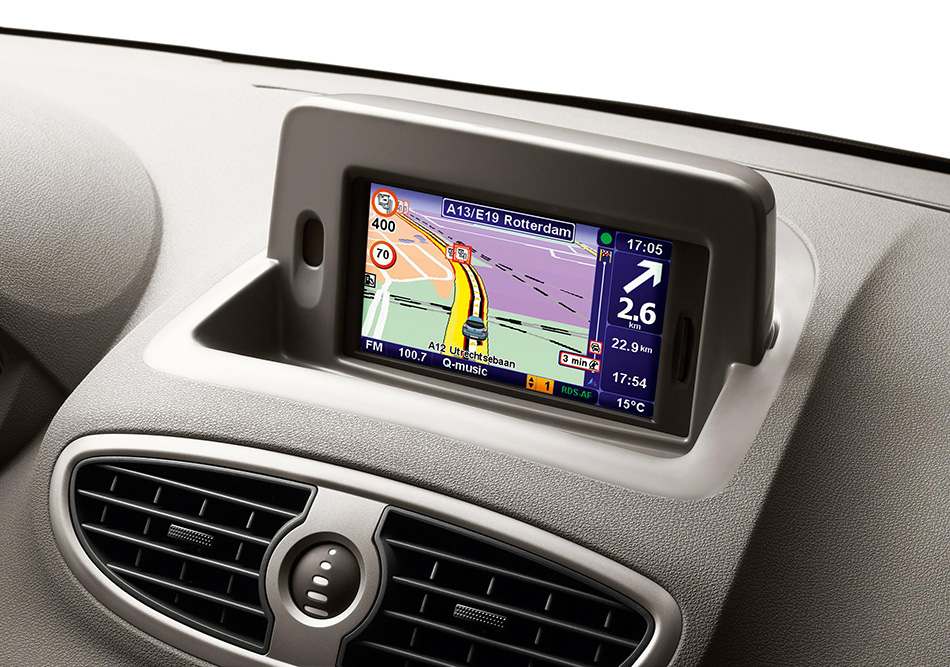 The advantages of an integrated system: positioned high up on New Renault Clio's dashboard, the large 5.8-inch (14.73cm) colour screen is close to the driver's line of sight, which means that his or her attention can stay fully focused on the road ahead. A bespoke exterior aerial ensures optimal GPS signal reception, while using the loudspeakers of the car's own audio system guarantees clear sound. Integrated systems offer greater protection from theft, too, and are safer in an accident. Carminat TomTom® is operated by a user-friendly Bluetooth® remote control, and covers some 40 countries across western and eastern Europe and Scandinavia, plus Turkey and South Africa. This new GPS navigation system is compatible with the new range of audio systems available for New Renault Clio.

In order to capitalize on its existing popularity (17 per cent of Clio III sales in Europe), New Renault Clio Estate features the same front-end styling cues as the hatchback version, which itself takes its inspiration from New Renault Mégane. With a length of 4,228mm (an increase of 26mm over Clio III Estate), New Renault Clio Estate continues to stand out as one of the market's most compact estates, while its dynamic stance is heightened by its steeply-raked rear screen. The latter is topped by a spoiler and black or chrome profiled roof bars (depending on version) which are unmistakable pointers to New Renault Clio Estate's calling as the perfect leisure car. The longer rear overhang frees up a generous boot volume of 439dm3 (VDA, up to parcel shelf), a figure which extends to 1,277dm3 (VDA) with the easy-to-manipulate rear benchseat fully folded. Meanwhile, New Renault Clio Estate's removable boot floor gives owners the opportunity to choose between maximum carrying capacity or a completely flat floor and makes it easy to switch between a wide variety of uses. The baggage cover, which is often seen as something that gets in the way, and the removable floor can both be stored away in their own clever, practical compartments.

New Renault Clio's interior styling was guided by a desire to provide a sense of well-being and perceived quality. The dashboard is available with a soft-touch finish and incorporates clear, easy-toread instruments, while the fully-integrated screen of the Carminat TomTom® satnav system is positioned at the top of the centre console. New Renault Clio is a car in which drivers feel immediately at home. The practical controls have been made even more user-friendly, including the short steering wheel-mounted stalks. The switch for the cruise control and speed limiter has been moved to the centre console, alongside the parking brake, and the dashboard display permits drivers to check whether the cruise control/speed limiter is activated or not. Meanwhile, special care has gone into the interior trim, with a range of elegant new ambiences depending on equipment level. Customers can choose a bright, relaxing hue, or might prefer a darker, sportier feel such as that proposed for New Renault Clio GT. 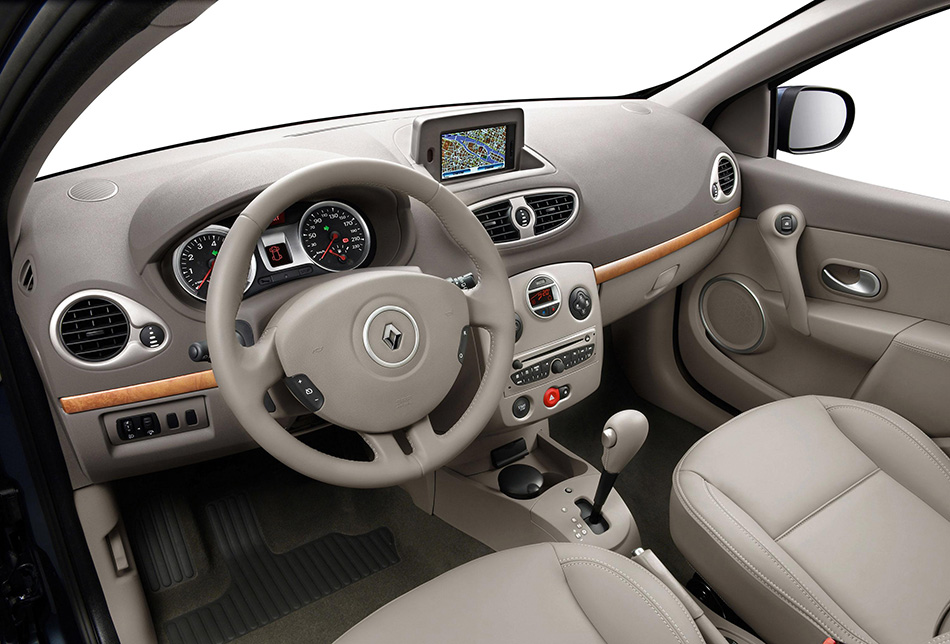 New Renault Clio boasts a class-leading overall cabin space index, with rear shoudler-room of 1,362mm in the case of three-door versions and 1,343mm for five-door and estate versions. The sensation of space is further accentuated by the generous headroom which is 866mm at the rear, while rear occupants benefit from kneeroom of 162mm, too. Indeed, New Renault Clio comfortably sits passengers who are more than 1.88m tall (95th percentile of the European population).

New Renault Clio claims soundproofing performance from the next segment up. Its architecture has been carefully engineered to filter out engine and transmission-generated noise, as well as road noise. Care has also been taken with the sound damping between the cabin and the engine, while wind noise has been reduced thanks notably to the use of inflatable inserts in the structure's hollow sections.

The New Renault Clio family delivers a carefully-honed balance between rigorous, comfortable and safe handling. The suspension has been developed to meet the expectations of the customers of the different versions (Hatchback, GT, Estate). The suspension of New Renault Clio Hatchback is identical to that of Clio III and provides a high standard of efficient, comfortable roadholding. Compared with the hatchback version, New Renault Clio Estate is equipped with a bigger-diameter rear anti-roll bar (21mm) for enhanced control of body roll. Its dampers and suspension travel have also been adapted to match the estate version's heavier weight and extra carrying capacity.

The range of engines and transmissions has been carefully selected to bring out the best in New Renault Clio's dynamic performance. These powertrains are respectful of the environment, too, thanks notably to:

The versions of New Renault Clio powered by the 1.2 16V 75, TCe and dCi 70/85/105 engines meet all three of the criteria necessary to qualify for the Renault eco² signature.

A raft of equipment from the next segment up

The New Renault Clio range includes a long list of equipment from the next segment up aimed at either facilitating driving or enhancing travelling comfort. New Renault Clio is the only B-segment model that can be ordered with a hands-free card. To unlock the car, the driver only has to put a hand near one of the door handles, or else activate the boot opening mechanism. The doors automatically lock at the push of a button situated on the driver's door. A remote lighting function enables owners to locate their vehicle at a distance thanks a bespoke button on the card which activates the lights. For hands-free starting, the card doesn't need to be inserted into a slot; its mere presence inside the cabin suffices thanks to special antennae.
New Renault Clio comes with the new 80W RadioSat Classic audio system which includes six loudspeakers, an MP3-compatbile CD player, the display of MP3 file names and an RCA socket situated in front of the gear lever.
Owners looking for more advanced connectivity will appreciate the two new Plug & Music and Bluetooth® functions. Safety: a priority for Renault, and a self-evidence for New Renault Clio

The New Renault Clio family benefits from Renault's extensive expertise when it comes to active and passive safety. The combination of New Renault Clio's suspension and a range of driver aids (ABS with electronic brakeforce distribution, emergency brake assist, ESC, traction control, engine torque overrun regulation) ensures an outstanding level of active safety. Meanwhile, Clio III Hatchback obtained the maximum five-point rating in the crash tests carried out by the independent body EuroNCAP at the time of its release in 2005. New Renault Clio is built on the same platform and is equipped with the third-generation Renault System for Restraint and Protection (SRP3), a pledge of uncompromising protection for all occupants.