AC Schnitzer presents a world first at the "Auto Car Show" in Zürich in November 2014. From 6 to 9.11.2014, the Aachen-based tuning experts present their own typically unique and outstandingly athletic version of the BMW X4.

And the diesel version is just as good: with performance upgrades to 220 hp (in preparation) for the 20d, 309 hp for the 30d and 360 hp for the 35d, the diesel variants perform brilliantly in the race and - like the petrol-engined versions - stand out thanks to the AC Schnitzer engine styling options. Naturally all performance upgrades were developed on AC Schnitzer's principle of "Efficient Performance", which means that although the engine power is increased, the CO2 emissions remain the same. So the CO2 value per hp falls. 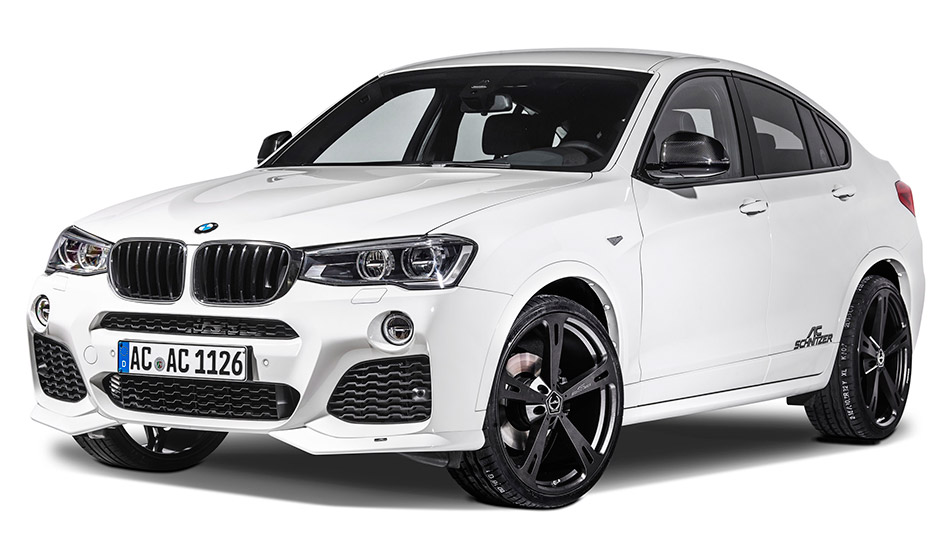 The X4 by AC Schnitzer demonstrates its power and speed with a sound which raises the hairs on the back of your neck, thanks to the AC Schnitzer stainless steel silencer and twin silencer with two "Racing" tailpipes (in right/left combination). At the same time, the exhaust gas extraction is optimized, so the vehicle engine can work more efficiently and "breathe" more easily. This has a further positive influence on the engine characteristics.

But performance must also be seen, and here the outward signs are provided by the AC Schnitzer silencer with 2 chromed "Sport" tailpipes in right/left combination. A purely aesthetic solution is available in the form of the chromed AC Schnitzer "Racing Evo" or "Racing" tailpipe trims.

The athletes' agility comes from the AC Schnitzer suspension spring kits which provide lowering by 20 - 35 mm on the front and rear, ensuring an optimum stance on the track and allowing the various X4 versions to race light-footedly through the corners.

Style is combined with aerodynamics in the BMW X4 by AC Schnitzer with tuning elements for the bodywork. Front spoiler elements and rear diffuser (both for vehicles with M-Technik pack) show what this vehicle can deliver. The AC Schnitzer carbon mirror covers and rear skirt film complete the picture of a perfect sports star.

Because inner qualities raise the market value of an exceptional talent, the Aachen-based tuning experts have thrown several tuning elements into the ring here: gear knob with digital gear display, illuminated leather gear knob and "Black Line" aluminium gear knob emphasise the sporting heritage of the vehicle in the interior, together with pedal set and foot rest of aluminium, the AC Schnitzer keyholder and the velours footmats.